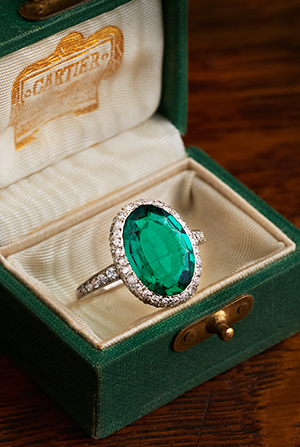 A Very Fine Antique Emerald, Diamond and Platinum Ring, by Cartier circa 1910

This exceptional emerald ring by Cartier stands out for its design, and is set with an emerald of the finest quality, but its reported history is equally interesting. The ring is offered at Dupuis after passing from mother to daughter for three generations in an important Canadian family.

The ring was purchased in the 1920s when the family was visiting Cartier in Paris. The family story states that while they were at Cartier, they were introduced to Russian Prince Felix Youssoupoff. The prince was said to have been consigning the ring for re-sale at Cartier. The Youssoupoff family reportedly sustained itself by selling jewels and other assets after arriving in Paris.

Youssoupoff was exiled to Paris from Russia after his involvement in the assassination of Grigori Rasputin, famed mystic and member of the court of Czar Nicholas II.

The Youssoupoff family was known to have acquired jewels at Cartier. The ring is certainly by Cartier, and is a jewel that would not be out of place on the hand of royalty.

A Very Fine Antique Emerald, Diamond and Platinum Ring, by Cartier, circa 1910