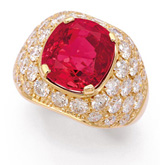 With report 11090179 dated 29 September 2011 from the Gubelin Gem Lab stating that gemmological testing revealed characteristics consistent with those of rubies originating from Burma (Myanmar). No indications of heating.

This colour variety of ruby may also be called 'pigeon blood red' in the trade. This report is accompanied by notes stating that 'Burma has long been recognised as the locality associated with the most desirable rubies in the world. Within Burma (now Myanmar), the most famed region is the Mogok Valley, or Mogok Stone Tract, in the Katha district, North East of Mandalay.' and 'These Mogok-type rubies typically possess a red body colour and red UV-fluorescence.' and 'The natural ruby of 7.62 carats described in the above mentioned Gübelin Gem Lab Report possesses the properties of Burmese rubies from the areas described above.' These characteristics in a Burmese ruby of this size-with no indications of thermal treatment and possessing a high degree of transparency-are a very rare combination. 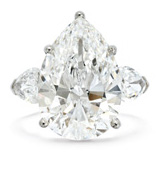 With report 2125637883 dated 24 September 2010 from the Gemological Institute of America stating that the diamond is E colour, VVS1 clarity.

Designed as a graduated series of pansies, each centering an old mine-cut diamond amid petals and foliage decorated with smaller old mine-cut and rose-cut diamonds, mounted in silver and gold, flowers detachable with fittings to wear as brooches and hair ornaments, with box monogrammed RB and stamped R & S Garrard & Co., Goldsmiths, Jewellers, & c. To The King, By Special Appointment To The Crown, Haymarket, London.
As the ultimate symbol of the highest form of jewellery, tiaras carry a special aura with jewellery collectors the world over. These impressive and elegant designs usually exemplify the best craftsmanship of their era. They also conjure images of fairy tale princesses and often possess an intriguing history. In the 19th century, the symbolic language of flowers was an important manner in which to communicate feelings between lovers. The pansy -- from the French pensée -- represented thoughts and attraction. The 14th Earl of Buchan commissioned R&S Garrard & Co. to produce this floral design tiara for his wife Rosalie, the Countess of Buchan. Queen Victoria appointed Garrard to the prestigious position of Crown Jewellers in 1843 and this lead to the production and upkeep of numerous pieces within the British Crown Jewels, as well as other Imperial Houses and aristocratic patrons. In keeping with the vast majority of tiaras of the Victorian period, the one offered here comprises specialized fittings for its various parts to enable multiple styles of wear; in this case, they can be converted to brooches and hair ornaments. The sparkle of the old-mine-cut diamond, fine workmanship, attention to detail, and imagination all achieve the culmination of grand design. In essence, a tiara such as this one epitomizes the height of both practical versatility and romantic fantasy. 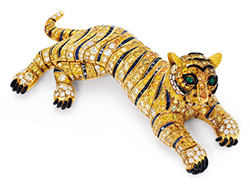 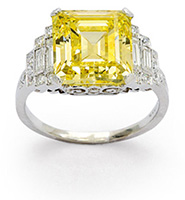 With report 5131964550 dated 10 October 2011 from the Gemological Institute of America stating that the diamond is fancy vivid yellow, natural colour, VS1 clarity

Dupuis specialist, Duncan Parker, will be providing auction estimates for your jewellery
with a view to selling at our International Jewels Auctions.