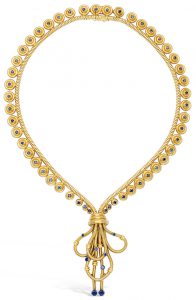 Frédéric Boucheron wished to be the watchmaker of “Joyful Hours” and, through this vision, created watches that celebrate life’s special moments. Established in 1866, the Maison quickly developed a reputation for timepieces and joyful jewels featuring animals, and textile-like treatment of precious metals.
In 1900 at the Universal Exhibition in Paris, the Maison Boucheron received the gold medal and was established as one of the forerunners of the Art Nouveau movement.
Among the illustrious clients of Boucheron: Ava Gardner, Joan Crawford, who acquired a jewelry set made of aquamarine stones and diamonds, later purchased by Andy Warhol. Sarah Bernhardt repeatedly ordered replicas of her pets, set onto rings and necklaces. Edith Piaf was a regular client for watches. In 1921, the Maison Boucheron created an exceptional diadem that became one of the British Queen Mother’s favorites.
Madeleine Astor was a faithful client of Frédéric Boucheron’s. As a passenger on the Titanic, Mrs. Astor survived the sinking, her husband having gallantly given his place on the lifeboat to a woman. All of her magnificent collection of jewels disappeared in the ocean that night, except for a sapphire and diamond ring, which Mrs. Astor was wearing. She wore it always after that, in remembrance of her valiant husband.

By Boucheron, previously offered at Dupuis. 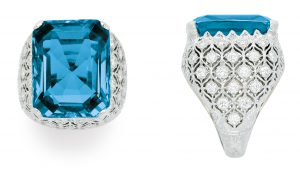 Started in Milan in 1919, by Mario Buccellati, the house is known for intricate detail and unique textures and finishes in their jewels.The House of Buccellati has long been recognized as having an important place in the pantheon of jewellers. Buccellati has produced jewels for many royal houses and film stars. As the house expanded, shops were opened in Rome, Florence and New York. After Mario died in 1965, sons Gianmaria & Luca set out to expand the house on an international scale, with shops in Hong Kong, Japan, Monte Carlo, Paris, Sardinia, Venice, Capri, Elba and Beverly Hills, providing closer access to devoted clients.
Buccellati continues today to produce their jewels in small workshops with artisans of many generations association with the House.

By Buccellati, previously offered at Dupuis. 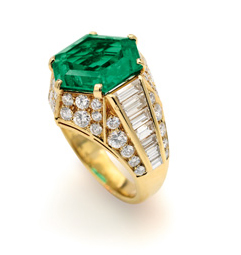 Descending from an ancient family of Greek silversmiths, Sotirio Bulgari founded the company in 1881, manufacturing precious silver objects. During the late 19th century, Sotirio moved to Italy and in 1884 opened his first shop in Rome. In 1905, with the help of his sons Costantino and Giorgio, he inaugurated the shop in Via Condotti, which remains Bulgari’s flagship store.
In the early 20th century the two brothers developed a deep interest and expertise in precious stones, jewels and watches. The period immediately after the Second World War marked an important turning point in the history of Bulgari. Giorgio and Costantino decided to create a unique style inspired by Greco-Roman classicism, the Italian Renaissance, and the 19th century Roman school. By the 1950’s-60’s, the bold and innovative style of Bulgari had gained success within the jet set and movie world, and they focused on jewels with precious gems.
In 1977 Bulgari launched the BVLGARI watch, a worldwide success story. The watch component of Bulgari has become a very important part of the business since then.

By Bulgari, previously offered at Dupuis. 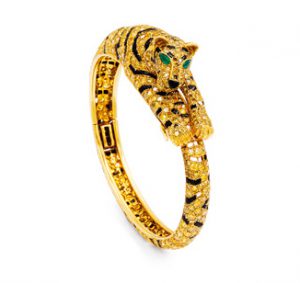 Louis-François Cartier founded Cartier, in Paris, in 1847. He had three grandsons, Louis, Pierre and Jacques, who were responsible for establishing the famous world-wide empire. The next fifty years saw many milestones: Royal clientele from England, Siam (now Thailand), Spain, Portugal, Greece, Italy, and Monaco. Cartier, in 1906, first introduced jewellery in the geometric style that was later to become known as Art Deco. Among the exceptional jewels and gems sold by Cartier was the famous blue diamond “The Hope”, now in the permanent collection of the Smithsonian, in Washington. Cartier moved to their current location at 653 Fifth Avenue, New York in 1917. The Morton F. Plant mansion was exchanged for a two strand natural oriental pearl necklace for Mrs. Plant, and $100 for Mr. Plant. The name Cartier continues to evoke the image of luxury like no other.

By Cartier, previously offered at Dupuis. 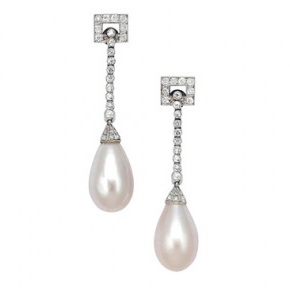 The history of Chaumet dates back to 1780 and is closely interwoven with the history of France.
The wedding of Napoleon and Josephine, and later with the Archduchess Marie-Louise de Habsburg-Lorraine, niece of Queen Marie-Antoinette, brought Chaumet numerous sumptuous orders. Chaumet became the most famous jeweller in Europe and built up a prestigious clientele.
Inspired by the enchantment of nature, Joseph Chaumet established himself as the absolute Master of the Belle Epoque.  With his elegant creations, he attracted royals and aristocrats. Aigrettes and tiaras became a very important part of the firm’s designs. Chaumet has produced more than 1,500 different models of tiaras.
Chaumet created simplified designs contained within rigid geometric outlines of the Art Deco period in the 1920’s and 30’s.
Responding to the continuous social, economic and artistic changes, Chaumet has maintained its legendary reputation. Design is determined by the good taste of the contemporary Parisienne, always in search of something new, different and sumptuous.

By Chaumet, previously offered at Dupuis. 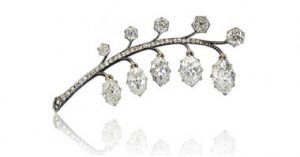 During its relatively brief history, Fabergé established a jewellery name of incomparable proportions. The house was established in 1842, and in 1870, Peter Carl Fabergé, became the head of the company. After winning the patronage of the wealthy and Royal families in Moscow, St. Petersburg, and throughout Europe, Faberge produced the first of the famed Russian Imperial Easter eggs in 1885, and was issued with the Russian Royal warrant as the Court Jeweller. With the official warrant from the Tsar, royals from many other parts of Europe embraced the House of Fabergé.
Fabergé was noted for the exquisite work and exceptional quality of the jewels and objects produced by the workshops. Delicate enamels and work produced with amazing precision are among the most recognizable features of the jewels that captivated collectors, particularly after a triumphal showing of Imperial Easter eggs at the Paris International Exposition of 1900.
Fabergé, at its peak, had massive workshops, and many workmasters who ran their own workshops to produce Fabergé work. There were also Fabergé stores in several locations, including London, for which items were signed in Western letters instead of Cyrillic.
The house of Fabergé became the favourite of clients around the world, and grew from strength to strength until the Russian Bolshevik revolution forced the Faberge family to flee in 1917, spelling the end of the House of Fabergé.
Many decades later, the house of Fabergé has been re-born, producing modern jewels, and also making objects that are reminiscent of the company’s heritage. Enameled eggs are also an important part of the modern Fabergé offering.

By Fabergé, previously offered at Dupuis.

This famous company dates back to its founder George Wickes who first entered his mark at Goldsmiths’ Hall in 1722, and went into business on his own in 1735. Soon after, he was appointed as goldsmith to the Prince of Wales.
Since 1843, when Queen Victoria bestowed the honour of Crown Jeweller on the company, Garrard has served six successive monarchs. One of the most enduring images of Queen Victoria is of her wearing a small diamond crown made by Garrard in 1870.
In 1911 two important commissions were undertaken: the making of Queen Mary’s Crown for the Coronation; and, the Imperial Crown of India worn by King George V later that year. In 1937 the crown set with the Koh-i-Noor diamond was made for the late Queen Elizabeth, The Queen Mother. The Imperial State Crown was remounted by Garrard in 1937, and then further adjusted for H.M. The Queen for the Coronation in 1953.
Ceremony and pageantry has always been a key element in the company’s heritage Robert Garrard’s hallmark of 1848 is found on the well-known America’s Cup. For modern day sports enthusiasts other presentation trophies include the Dubai World Cup, the Cricket World Cup, and the Premier League Trophy.

By Garrard, previously offered at Dupuis. 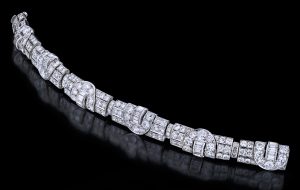 Established in 1827, Mauboussin found increased notoriety among discerning buyers, and experts alike, winning a medal at the Exposition Universelles in Paris, 1878. In 1925, at the Exposition des Arts Decoratifs, the jury awarded the house the grand prize for their innovative Art Deco designs.
Still at the cutting edge of design, Mauboussin has an international presence in Paris, Tokyo, and New York, among other locations, each of which is a work of art itself, displaying the works of the jeweller’s art within.

By Mauboussin, previously offered at Dupuis. 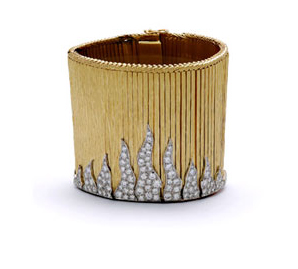 Pierre Sterlé founded his company in 1934, in Paris. From 1934 to 1939 Sterlé created and made jewellery for houses such as Boucheron, Chaumet, Kirby, Ostertag and Puiforcat. At this time, many fashionable Parisians started to know the way to his atelier. Sterlé was adamant that he wasn’t going to exhibit his work in any shop window. The renowned French writer Colette mentioned Sterlé’s jewels in some of her books. Through the 1950’s Sterlé was invited to Egypt by King Farouk and to Brazil where he was welcomed by President Vargas. The wife of the Maharaja of Baroda ordered some jewels and an exiled Egyptian queen asked Sterlé to remodel her crown jewels. Sterlé received, in 1953, ’54, and ’55, the prestigious ‘Diamond Award’ from De Beers. Being an avid reader, in 1960, Sterlé collaborated with Salvador Dali for a book cover. He made it in bronze and covered it with gold, gemstones and pearls. It was called the ‘Livre de L’Apocalypse’. It was unique and illustrated by all of the contemporary painters of the time. In 1961, Sterlé started selling most of his creations to the ‘Maison Chaumet’. An artist with exceptional creativity, and modest business skills, by 1976 Sterlé was forced to declare bankruptcy and liquidate his stock. Chaumet purchased most of his creations and signed anything that Sterlé forgot to mark, including jewels dating back to the early 1960’s. Sterlé remained employed at Chaumet as a ‘Technical consultant’, until his death in 1978.

By Sterlé, previously offered at Dupuis. 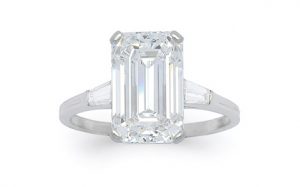 Founded in New York in 1837 Tiffany remains an icon to jewellery consumers around the world. Known for innovation and high standards, Tiffany had adopted the silver standard of “925”, and 95% standard for platinum, both later adopted as USA standards. In 1886 Tiffany introduced its iconic Tiffany setting providing a light and open setting to best display a diamond.
Constantly working to bring the latest in design innovations to its offerings, Tiffany regularly brings designers to its clients; in 1956, Jean Schlumberger joined and in the famous annual “Blue Book” of 1974-75, Elsa Peretti was introduced. Paloma Picasso was first featured in 1980 and architect Frank Gehry has designed many current offerings.
Drawing on the natural world, the company was early on recognized as a master of Art Nouveau and the Arts and Crafts movement. Through the decades it has remained at the forefront of design, noted for the use of exceptional materials and unwavering standards. 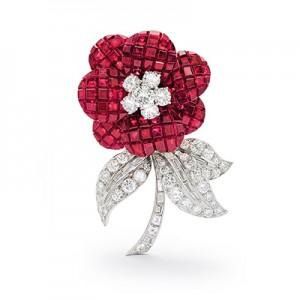 Van Cleef & Arpels has always been inspired by the unique creative energy of love, for it was love which brought the Maison into being.
Towards the end of the 19th century, a young girl named Estelle Arpels – the daughter of a dealer in precio­­us stones – met a boy named Alfred Van Cleef, the son of a stone-cutter.
This led them to founding the Maison of Van Cleef & Arpels. In 1906, Alfred set up in business with Estelle’s brother Charles, a talented salesman who managed their new boutique in Paris’ Place Vendôme. Two years later, Estelle’s brother Julien joined the firm;a third brother, Louis, joined them in 1912.
Over the years that followed, the name Van Cleef & Arpels became synonymous with the most exquisite jewellery in the world. With that achievement, the love, which first brought Estelle and Alfred together, lives on to this day through the many enchanting love stories of the Maison.
Van Cleef & Arpels remains one of the most desired names in jewellery, noted for many innovations in design, manufacturing and gem setting techniques which changed the jewellery landscape and the way we think of jewellery.