Alloys through the ages

As I refine and polish this column, I reflect on the metals that have been used in the production of jewels throughout the very long history of precious things. The other day, I was reading Pliny the Elder (as one does), whose writing included a description of ‘touchstones’ used for gold testing during his time. Around 2000 years ago—just before Pliny died in the eruption of Mount Vesuvius that also buried Pompeii—there was no standard of assay or alloying. Even in those days, however, the Romans had figured out rubbing a piece of gold on a touchstone could help determine whether something had higher or lower gold content.

A Diamond and Two-Tone Gold ‘Fusion’ Ring, by Georg Jensen

Most jewellery (though not all) is composed of precious metal. The metals we use seem simple, but there is a complex set of mixtures and compounds. The big three—gold, silver, and platinum—are found in more combinations than any, and are referred to as the ‘noble metals.’

Why are they noble? While they were traditionally owned only by the wealthiest individuals in a community (or the nobles, as they may have been known), that isn’t the real reason for the name. Metals are called ‘noble’ if they don’t break down under normal conditions and aren’t easily damaged by solvents or acids. (Mind you, I’ve still heard of a lot of broken-down nobles…but never mind that.) 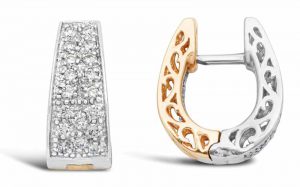 It can be easy to forget the metals we use are part of a complex set of mixtures.

Gold, as mined, is generally not pure. It is naturally an alloy with other metals, such as silver and platinum. In fact, the pure and unalloyed forms of metals are rarely used in jewellery. Silver and gold are too soft for most applications, and platinum can be difficult to work in its pure form.

These days, we have established very precise methods of mixing metals and producing consistent alloys. Around the world and over the years, however, we’ve seen dozens of variations. In the 19th century, for example, Great Britain used 15- and 22-karat versions of its standard alloys. Today, these have changed to nine- and 18-karat, largely due to lower costs (thanks to the reduced gold content) and the need for harder-wearing alloys (22-karat was quite soft).

Canada’s Royal Canadian Mint, on the other hand, is world famous for its ability to produce highly pure 0.9999 gold. Often described as ‘four nines,’ this is an alloy containing 99.99 per cent gold. Gold of this purity is used for the production of high-grade bullion coins.

There are also lots of methods of stating the purity of the many metal alloys we make. In North America, for at least the last century, gold has been described by its ‘karat.’ Pure, unalloyed gold is 24-karat.

There are varying standards for precious metal purity in countries and communities worldwide. There have also been concerted efforts to produce standards that can be used and recognized internationally. However, the world is made up of independent countries, so the guidelines we have arrived at are national in nature. 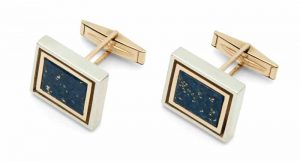 Although we have developed very consistent methods for producing alloys, we still see variation from country to country.

The United States and Canada, for example, are close neighbours, but follow different rules. In Canada, we tend to use just the letter K as an abbreviation for ‘karat,’ while the United States typically uses ‘Kt.’ Canadians also commonly use 10-, 14-, and 18-karat gold, and while we don’t use it in jewellery, we allow a purity as low as nine-karat gold. The United States allowed alloys with no lower than 10-karat purity to be considered gold until it recently removed the threshold. This difference was due to Canada’s historical connection to Great Britain, where nine-karat gold is standard.

In both Canada and the United States, the proportional purity of gold is spelled ‘karat,’ with the letter K. In Great Britain and some other Commonwealth countries (Australia, for example), we see the word spelled with the letter C—the same as a carat of gemstones. This is abbreviated as ‘C’ or ‘Ct.’ The spelling used here and in the United States is employed to help minimize confusion.

In Europe and much of the rest of the world, metal purity is stated as a number in parts per thousand. The proportion can be worked out by dividing the alloy’s karatage by 24 (pure gold). In other words, 18-karat gold in Canada could be translated to a European standard by dividing 18 by 24, which equals 0.750. 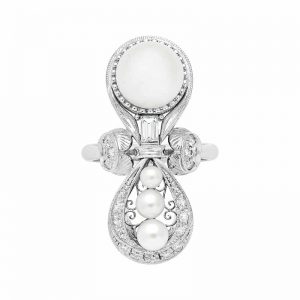 Over the years, we’ve created a wide variety of alloys, which result in different colours and levels of workability.

Traditionally, France and Italy have had a minimum standard of 18-karat gold (stated as ‘750’), but with the uniform standards of the European Union (EU), they have both had to allow lower standards such as 14-karat. However, most people in those countries still don’t think alloys of less than 18-karat purity are really gold. Germany has traditionally allowed eight-karat gold, generally represented in its digital form as ‘333,’ meaning 8/24 of the item (or one-third) is gold.

At the other extreme, traditional Chinese gold jewellery is made in pure 24-karat gold, and in India, jewellery has traditionally been made with 22-karat gold. Such high-karat jewellery is really a wearable form of gold bullion, and is bought and sold with little variation between the retail and resale prices. Those markets are seeing globalization with more Western 14- and 18-karat gold being used in jewels made in these countries. 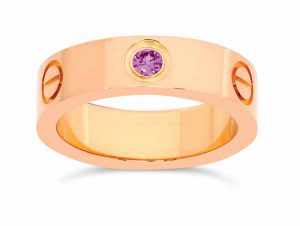 Standards for the purity of gold alloys vary across the world.

The rest of the metal

What happens with the rest of the karatage or percentage? For instance, 18-karat gold is 75 per cent gold, meaning 25 per cent of it is something else. There is no regulation for the alloying metal virtually anywhere in the world.

Gold is yellow, but we can make it other colours by mixing it with other metals. Copper, for one, is a pink metal, and when mixed with gold, it makes the gold pink, producing rose gold. Rose gold was very popular in the 19thcentury, and it has come back into style today. We see lots of watches in this alloy.

White gold can be produced by alloying white metals with gold. Traditionally, nickel made a great white gold alloy, but many people have an allergic reaction to this metal, so it has been dropped. Platinum also makes a good alloying option, but it’s expensive. These days, several different metals are used for white gold. One odd alloy said to contain zinc is 19-karat gold, but quite white. It’s strange to have a higher proportion of yellow gold still result in a whiter alloy than 18-karat white gold.

White gold has been very popular since the 1990s, but has been on the way out for several years in Europe. It is gradually being replaced by a return to yellow gold. North America is usually a few years behind Europe in terms of trends, but yellow gold is coming back here, too. 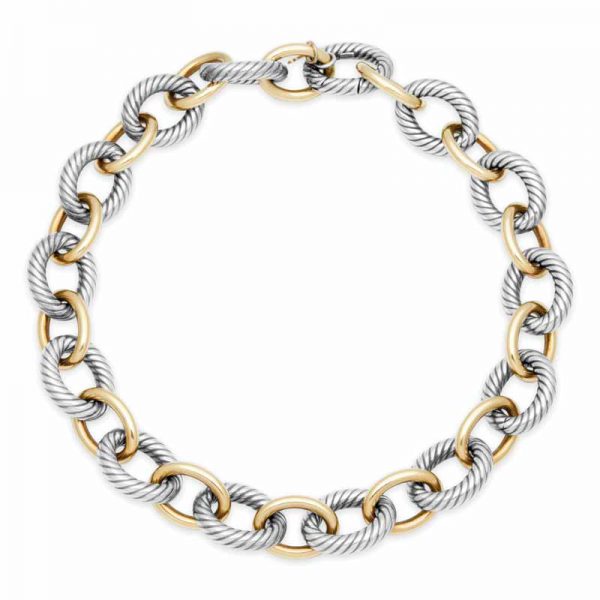 The industry has largely moved on from the fashion of ‘tricolour’ pieces in recent years.

In the 1980s and 1990s, lots of jewellery was made using multiple colours of gold in the same piece. Italy was particularly noted for its tricolour gold chain bracelets and necklaces. Today, the industry has moved on from that fashion, and we don’t see much of it (with certain exceptions, such as Cartier rolling rings).

Unusual alloys have also been made. Blue gold, for example, is gold with iron. It is brittle and unworkable, but Patek Philippe has used it in watch dials. Purple gold is gold and aluminium, and is also brittle and difficult to work.

Silver has had a more constant standard—for centuries, we have used its sterling or 925 alloy. This is 92.5 per cent silver, usually combined with copper. Rarely have other standards been seen for this metal, as the use of sterling is fairly global. Occasionally, we’ve also used ‘coin silver,’ which is 80 per cent silver. Although this alloy is not made from coins, its name is inspired by the fact many silver coins have been made from 80 per cent silver, typically with a copper alloy. 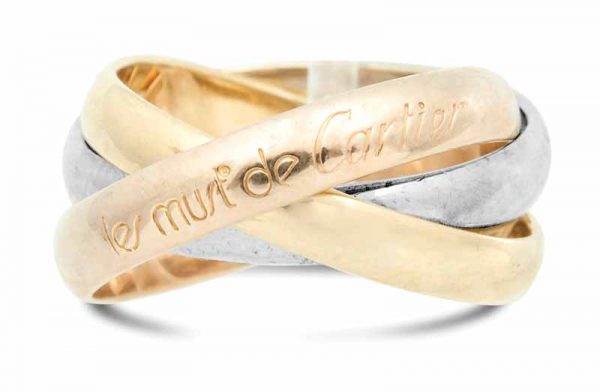 Many different alloys exist, but variations of gold, silver, and platinum are most popular.

Platinum has only been widely used for around a century. Generally, the standard of 95 per cent platinum is seen around the world (usually stamped ‘Pt,’ ‘Plat,’ ‘platinum,’ or ‘950’), with the United States sometimes using 90 per cent platinum with 10 per cent iridium as the alloy. Hong Kong recently introduced what was called 18-karat platinum or 75 per cent platinum, but it hasn’t really caught on elsewhere in the world.

Over the past 20 or 30 centuries, we’ve endeavoured to establish standard metal alloys for jewellery. We have been very successful—in fact, so successful we’ve created dozens of single standards, all fulfilling certain needs.