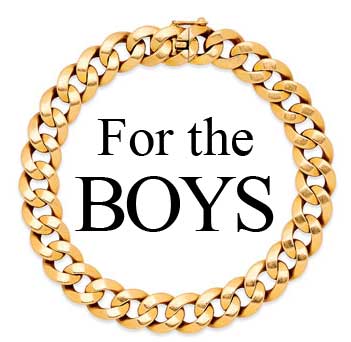 Gold and gem-set trinity band by Cartier. Men’s jewellery through the ages

Since the earliest recorded history, there is plenty of evidence men adorned themselves with jewellery of some form or fashion to convey a sense of authority, importance, or ceremony. Anthropological excavations show pre-historic males carried ornaments for luck in hunting and protection in battle. The Pharaohs of Egypt, as well as male members of the Inca and Montezuma tribes in South America, were all fond of accumulating and wearing gold and gems. Julius Caesar, Alexander the Great, and Napoleon Bonaparte are but a few of the historical men who displayed an affinity for gems.

Popes and bishops have worn rings since the early 19th century set with amethyst mined in the Ural Mountains of Russia. Even now, male spiritual leaders wear gem-set rings, while kings, princes and membersof aristocracy the world over continue to adorn themselves with gems. A symbol of power and heritage, the rings are often intended to be worn by each successive generation.
This sense has survived and transformed into a wide variety of adornments from the 19 century to the present. Faberge made superb cufflinks and cigarette cases sported by the Czar and his entourage. In Victorian England, most gentlemen wore a pocket watch with chain and fob, many set with gems and intaglio seals.
In the early 1900s, men began wearing signet rings, often engraved with the family seal to create an impression on sealing was, a method to indicate a letter‚Äôs contents were read only by the recipient. The use of the signet ring in this manner became common practice, replacing the fob for this purpose. 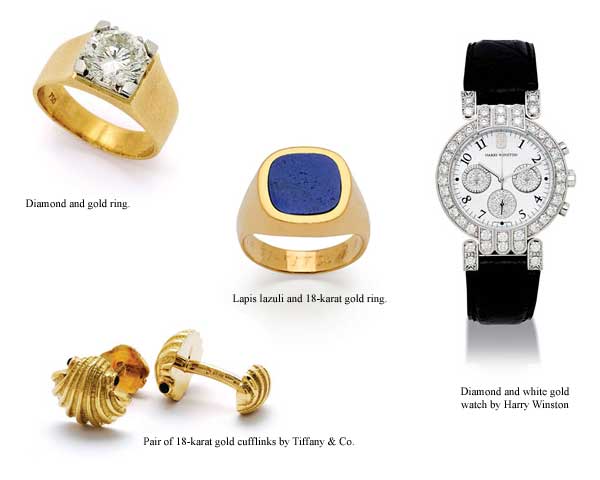 A formal event
Following the First World War, the gentlemen‚Äôs wristwatch soon made the pocket watch all but obsolete. The 1920s saw a vast increase in soirees as a means of socializing, coinciding with the proliferation of electric lights. Men dressed formally with cufflinks and shirt studs, some carrying gold cigarette cases, their thumb pieces decorated with gems.

The big leap forward for men‚Äôs jewellery occurred in the mid-20th century. By the 1950s, men continued to wear dress sets, watches, and signet rings, but the variety of rings began to widen. These included bezel-set diamonds, sapphires, and rubies, as well as all manner of cabochon stones, such as star sapphires, star rubies, jade, and cat‚Äôs eye. These were nearly always set as a single large stones.

This period also saw the introduction of synthetic star sapphires, while all colours of semi-precious stones in slab cuts of oval and cushion shapes were manufactured in great abundance. Black onyx, lapis lazuli, bloodstone, sardonyx, and tiger‚Äôs eye were all popular in men‚Äôs rings, while birthstone rings and astrological sign pendants were also being marketed directly to men. Starting in the 1950s, it was expected that married men wear a wedding band, which was usually plain gold without stones. Class rings and sports team rings also took hold.

In the 1970s, men continued to wear gemstone jewellery, and ring designs became increasingly varied in shape and texture. Curb link bracelets and neck chains added flair to men‚Äôs collections. Although plain gold at first, they soon included small diamonds and even coin pendants and religious pendants, such as cruciforms and Stars of David. Rings now incorporated panels of diamonds set in rows forming square and oval flat tops. Many fraternities, clubs, and associations created their own symbols, including Masonic rings and service medals.

The 1980s saw a bold new world emerge with men suddenly sporting single diamond ear studs and small gold hoops. Some even took to wearing wedding bands accented by small diamonds, rubies, and sapphires. The Cartier trinity rolling ring is a fine example. Watches became more refined and some were set with diamonds for the first time. The idea of the vintage wristwatch was born, meaning those from the earlier decades of the 1920s, ‚Äò30s, and ‚Äò40s.

All in all, men‚Äôs jewellery has evolved greatly over the past century and continues to do so in variety and scope. For the most part, designers have avoided imitating ladies‚Äô jewellery and are now incorporating non-traditional metals like titanium and tungsten carbide. However, in celebration of Cartier‚Äôs 100th anniversary in America (1909 to 2009), iconic photographer Bruce Weber shot male model Richard Lima wearing a very large and feminine diamond necklace, containing many large diamonds and with a value in the seven figures. While it‚Äôs unlikely other males will copy this look directly, it may signal a move to an acceptance of more jewellery design parity between genders.