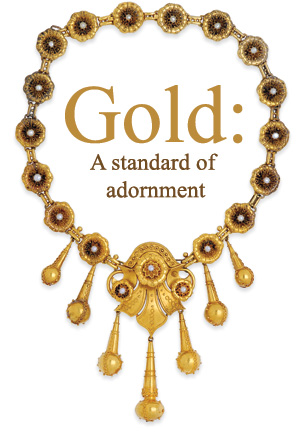 From the dawn of time, man‚Äôs natural fascination with lustrous objects has driven the desire to acquire them, at times at great risk or peril. Throughout the ages, science and art have co-existed in the quest for new sources of gold, related technologies and breathtaking designs, serving to maintain the enduring desire for this precious metal.

A predilection for wealth and its visible trappings inspired many an adventurer to set sail for undiscovered lands, signaling opportunities both in the New World and in the older, more established realm. Spanish conquistadors in South America and prospectors in the American and Australian gold rushes aspired to the same challenges.

Transformation over the ages
In the distant past, medieval alchemists searched for a formula for the transmutation of baser metals into gold. Similarly, throughout the ages, and continuing to the present day, these expectations have frequently channeled the focus of the scientific and commercial domain towards various alterations and improvements to this precious, and at times, rare metal.

Advancements yielded the secrets of its malleable and ductile qualities impressively and dramatically over the centuries. A major transformation came in the form of alloying other metals in varying quantities, namely silver, copper, bronze, and iron, resulting in different colours and karats. From the Egyptian discovery in the third millennium BC of electrum‚Äîa natural gold and silver alloy‚Äîto gold and palladium mixes in the 1920s, there has been an aspirational quality attached to gold jewellery.

Throughout recorded history, gold has been used for decorative purposes, as coinage to represent the wealth of a state, and for personal adornment. From the simplest, unadorned circular ring to the most elaborately decorated breastplate/necklace, advances in technique and refinements in expertise and taste influenced changes in design. Starting with the Sumerians in ancient Iraq and dated to as early as 3000 BC, the popularity of gold jewellery has continued unabated. Repouss√© techniques and the fox-tail chain linking beloved by the ancients can still be appreciated by today‚Äôs jewellery buyer. During the Hellenistic period in the 300s BC, representations of laurel leaves dominated head wreaths, necklaces, and earrings, evoking the mythology of the Greek gods. In Crete, delicate filigree enhanced wirework pieces.

History inspires
Excavation of the historic tombs in Egypt‚Äôs Valley of the Kings inspired archeological Revival style trends in jewellery design. In 1922, British archeologist Howard Carter discovered a trove of never-before-seen or even imagined golden treasures in the tomb of the Pharaoh Tutankhamen and other burial sites. These artifacts from the13th century BC indicated influential shifts in expertise characterized by novel innovations. Notably, Egyptian goldsmiths hammered the metal into extremely thin sheets to produce gold leaf¬† and melded various alloys, allowing for differentiation of colour. The Egyptians also perfected the lost-wax technique in the 12th century BC, a casting method still used today.

However, Egypt wasn‚Äôt the only early civilization to make advancements in techniques or uses. The Babylonians devised a fire assay test for gold purity at around the same time. In the 7th century BC, the Etruscans developed granulation, a sophisticated technique for soldering tiny grains of gold beads that were used in intricate patterns. The medieval period saw a resurgence of this element, dominating Renaissance designs of the day and in its revival in the mid-19th century AD. In the 5th to the 1st century BC, the Celts wore rigid necklaces of penannular shapes with twisted spiral motifs in what is now the British Isles and in Gaul, modern-day France.

Reproductions of ancient artifacts continue to be popular themes for many design houses. Contemporary artists, sculptors, and architects, such as Georges Braque, Paloma Picasso, Elsa Peretti, and Frank Gehry have also found inspiration in the metal.

Worth its weight
From the time small gold squares became legal tender in China around 1000 BC and pure gold coins were minted in Asia Minor about 500 years later, this metal has had a direct correlation to the stability of monetary reserves of governments and investors. However, gold represents more than just a financial or dollar value. It is symbolic of a high standard. Take, for instance, the much-coveted gold medals at an Olympic event or consider common phrases of praise such as, ‚Äòworth its weight in gold‚Äô and ‚Äògolden boy.‚Äô

Throughout the ages, gold jewellery has symbolized the ideal of purity, strength, wealth, and power. All this is tidily and conveniently wrapped up in an item designed to be worn and admired. It is beauty coupled with intrinsic value, atmosphere, and mood, captured in solid form and contained in the past, present, and future.

Egyptian lapis and 22 karat gold swivel ring, circa 1400 BC. 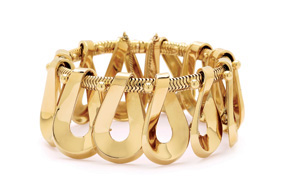 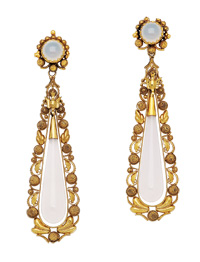