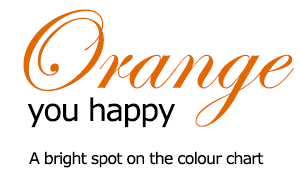 Always an attention grabber, the colour orange is particularly hot, hot, hot right now and if you can actually remember the acid-drenched 1970s, you’ll recall it was fashionable back then, too. This citrus colour dominated the collections from major couture houses just this past spring and summer, and its resurgence in popularity is also influencing tastes in jewellery for the upcoming fashion season.

Paradoxically, the colour denotes extreme ends of the price and luxury spectrum, evoking strong feelings either for it or against it. This ‘love it or leave it’ attitude means you definitely couldn’t describe orange as a neutral; for anyone that finds the colour appealing, the variety of shades is almost endless, as it ranges from the boldest in-your-face hues to the most delicate and subtle tones.

Psychology of colour
Colour theory experts have long linked orange to feelings of happiness associated with warmth, liveliness, and energy, generally engendering positive emotions. Store visuals effectively use the colour to draw in customers and direct flow into and through aisles. Traffic cones alert us to watch out for potential hazards. Fast food restaurants, with their ‘move’em-in-and move’em- out’ approach to speedy service, liberally use orange to stimulate the appetite quickly.

Orange also shows up in quirky casual mom and pop-run bistros‚Äîmismatched chairs, odd bits of china and cutlery, and displays of mason jars filled with preserved peaches or apricots lined up in rows designed to serve as both tempting nutrition and decoration. In the autumn, Halloween pumpkins carved into jack-o’-lanterns brighten verandas and porches.

The experts at Pantone Color Institute‚Äîthe arbiters of industry colour choice for all types of products from bath towels to cars to wall paint‚Äîhave deemed Nectarine a hot hue for Spring 2013. Described as ‘bright,’ ‘effervescent,’ and ‘a tangy burst of flavour,’ it’s exactly what you might ask for in a piece of jewellery. 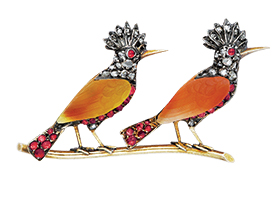 Antique brooch with carved citrine bodies of kingfishers accented with rubies and diamondsand set in silver and 18-karat gold.

Politics of colour
In the 1860s, esteemed Ivy League university Princeton chose orange as one of its official campus colours in homage and to celebrate its historic link to the Dutch Royal House of Orange. History buffs might recall the reign over England and Ireland by the Netherlanders, William III and his wife, Mary II, in the 1680s, and how their rule changed history, but that’s another story. The colour’s popular use in Holland for official celebrations continues to this day, and it’s also utilized around the world to designate Protestantism.

Variations of colour
The assortment of orange-hued gemstones has inspired jewellery designers throughout history.

Take Carnelian, a type of chalcedony. Translucent and a popular material carved en cabochon, it’s often used in beaded bracelets and necklaces, and frequently as flat plaques for intaglio seals in signet rings. Broad-minded Victorian gentlemen might have sported a risqu√© erotic scene from antiquity on their pinkie finger or watch fob. Cartier used carved carnelian leaves in a 1980’s version of its ‘Tutti-Frutti’ motif pieces and a decade earlier, many of Aldo Cipullo’s designs featured various orange shades of carnelian beads and discs. Marina B has a series of earrings with interchangeable drops, one of the choices being a dramatic dark orangey brown carnelian. Bulgari’s familiar ‘Tronchetto’ series consists of rings with smooth clean mounts featuring a choice of gemstones, including polished chunks of saddle-shape carnelian and citrine. Brownish-orange sard‚Äîpart of the extensive quartz chalcedony family‚Äîspessartine, and hessonite garnets and fire opals, are other variations on the orange theme.

With a nod to Russian aristocracy, Imperial topaz is the pinkish-orange variety, while the predominantly orange-type is called Precious topaz. Those stones leaning to a more pink or a deep sherry colour tend to be the most valuable. A richly coloured orange topaz is the central highlight of a navette-shape diamond brooch from 1925. The Victorians and Georgians enjoyed wearing faceted topaz necklaces set with the palest taupey beige-orange stones in graduated collets. A detachable pendant could be worn as a brooch, and the stones were sometimes enhanced by orange foil on the backs. Citrine often has an orange cast to it, as in a delicate antique brooch set with carved citrine bodies of kingfishers accented with rubies and diamonds and mounted in silver and 18-karat gold. Topaz and citrine are considered birthstones for November.

13.50-carat orange topaz and diamond ravette-shaped brooch in platinum, circa 1925.

Citrus and sunshine
In addition to the base corundum, small quantities of iron cause the pinkish-orange tinge in sapphires specifically termed Padparadscha, meaning ‚Äòthe colour of the lotus flower.‚Äô Rare natural untreated stones from Sri Lanka can garner great prices at market.

In a design eerily similar to one from Van Cleef & Arpels, the Aletto Brothers position multiple rows of invisibly set calibre-cut orange sapphires to decorate a highly flexible bracelet attractively bordered by diamond collets. For other contemporary examples, we look to David Webb pre-1975 and his admirable use of deep corals, especially in the ‚ÄòChimera‚Äô collection. If you come across one of those rare two-headed bangles, go ahead and spend a monstrous amount of $70,000 to $200,000, depending on provenance, ‚Äôcause two heads are truly better than one.

From the 1980s, Jean Schlumberger‚Äôs collaboration with Tiffany & Co., produced a stackable hinged bangle from the iconic ‚ÄòPaillon√©‚Äô series, imaginatively embellished with 18-karat gold tracery and diamonds on top of hot, sultry orange enamel. Some of these jewels can command up to $100,000. For a flamboyant burst of colour, we have a pair of spherical bomb√© ear clips set with faceted citrines crisscrossed with diamond latticework. Yummy!

Orange is the widely recognized signature colour for Herm√®s, its striking cardboard box‚Äîa collectable in its own right‚Äîcontaining an iconic patterned silk scarf, wristwatch, or brightly coloured enamel bangle in the same hue. Chopard also tempts with a juicy and luscious leather strap accenting a diamond wristwatch.

Bring on the orangey bling
Orange diamonds are exceedingly rare and notable: Harry Winston‚Äôs so-called ‚ÄòPumpkin‚Äô diamond, valued at $3 million, is categorized as fancy vivid orange. Weighing 5.54 carats, it was famously worn by actress Halle Berry at the Academy Awards in 2002.

So, however you slice it, happy, bright, or cheerful, orange is an approachable colour bringing instant light to life, a prescription for happiness and health. Enjoy a dose of it daily‚Äîit‚Äôs easy to squeeze a little more joy out of the every day.