The story of the Asscher cut

It’s always been hip to be square

As with fashion, everything old is new again. Witness the renewed interest in cushion cuts, rose cuts, briolettes, diamond beads and rondelles, which have all found new life in contemporary jewellery. In a very unique category, you’ll find the cool beauty of the exclusive Asscher cut – a stone with incredible brilliance that pulls you into its hypnotizing depths. 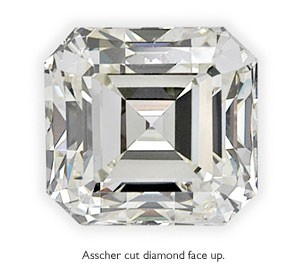 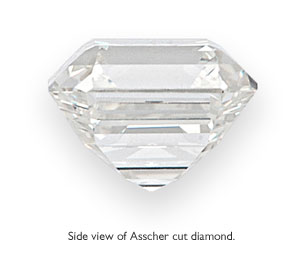 The history of the Royal Asscher Diamond Company began in 1854. The family business quickly earned a well-deserved reputation for cutting and polishing diamonds of unusual or difficult shapes.

In fact, King Edward VII of England entrusted the Royal Asscher Company to cut the Cullinan Diamond, which, at 3,106 carats, was the largest rough gem-quality diamond ever found. The senior member of the firm, Joseph Asscher, studied the great stone for two months before deciding the best way to cleave it. On Feb. 10, 1908, he was ready to begin. It took two attempts to cleave the Cullinan exactly as Asscher had planned. A popular legend claims Asscher fainted as soon as his high-pressure work was done. His son, Louis, however, claims the only thing that went down that night was a bottle of champagne.

It was this highly regarded company that patented the rectilinear diamond cut – now known as the Asscher cut – in 1902. It was actually the forerunner of the modern emerald cut. Developed by Joseph Asscher himself, the cut is a typically square-ish, step cut diamond with deeply cut corners, giving the stone an almost octagonal outline. It features a small table (52 per cent or less), fat corners and fat facets, with a high crown and deep pavilion. Most jewellers today would probably classify an Asscher as a square emerald cut, but purists claim they are very different. It has been described as “quietly sophisticated” and “regal.” All agree this special cut offers incredible brilliance and tremendous depth.

Inspired by the table cuts of the Renaissance, the Asscher cut was a significant departure from the old-mine cuts that dominated the 1800s. Although it was the first step towards the emerald cut we’re all familiar with, it flashes more light and fire thanks to Asscher’s high crown and small table.

The Asscher cut, along with other step cuts, became very popular in the streamlined geometric jewellery of the Art Deco period. At some point in the 1930s, however, the popularity of the Asscher cut faded, largely due to the increased use of the diamond saw and the economic effects of the Great Depression.The high crown and small table demanded a greater loss from the original rough than an emerald cut. As a result, the Asscher simply wasn’t economically feasible option during the Depression and the war years that followed.

“When I look into it, the deep Asscher cuts which are so complete and so ravishing ‚Äî are like steps that lead into eternity and beyond. My ring gives me the strangest feeling for beauty.¬†With its sparks of red and white and blue and purple, and on and on, it sort of hums with its own beatific life. (it says) I want to share my chemistry – my magic – with you.”

The Asscher cut is currently experiencing a popular resurgence. To satisfy this renewed interest and reclaim their heritage, The Royal Asscher Cut Diamond Co. resumed production of the original Asscher cut in 2001. Now called The Royal Asscher Diamond, the modern version has wider corners and more facets than the original, but retains the grace and elegance of its predecessor. Each new Asscher cut diamond is numbered, with the company logo lasered on the girdle. Original Asscher cut diamonds, found only in period jewellery from the 1920s and 1930s, are extremely rare. Dealers usually have to wait for individual stones to appear at auctions or estate sales. Today, more recent Asscher cuts, manufactured by the experts themselves, can be found. Unfortunately, the revitalized Royal Asscher Diamond hasn’t been on the primary market since 2005, helping maintain its rarity and making it a coveted item among gem connoisseurs and celebrities.

Rarity is not Asscher’s only appeal. Refined and radiant, it has the glow of a modern stone, with the distinctive look and handcrafted quality of an older piece. That’s why Hollywood icons such as Kate Hudson and Reese Witherspoon have proudly sported sleek and sparkling Asscher cut diamonds and why Sarah Jessica Parker’s Sex and the City character proudly wore an Asscher cut diamond on her middle finger. Sharon Stone is also an avid fan, having picked out her own 11-carat stone.

The most famous and stunning Asscher cut diamond donned by a celebrity is probably the stone gifted to Elizabeth Taylor from Richard Burton. The remarkable Krupp diamond is 33.19 carats and was purchased at an auction in the late 1960s. After receiving the stone, Taylor wore it constantly, both on and off screen. It was even animated into her special guest appearance on The Simpsons. Taylor says, “When I look into it, the deep Asscher cuts – which are so complete and so ravishing – are like steps that lead into eternity and beyond. My ring gives me the strangest feeling for beauty. With its sparks of red and white and blue and purple, and on and on, it sort of hums with its own beatific life. To me, the Krupp says, “I want to share my chemistry – my magic – with you.” 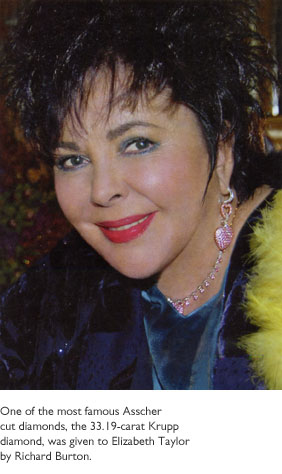