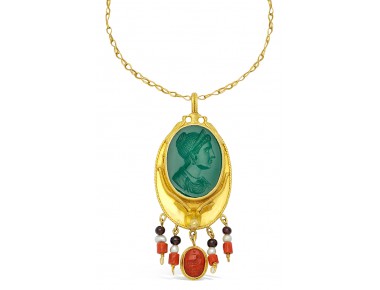 Hammer Price
$1,500 CAN
Featuring an oval green chrysoprase cameo depicting the head and semi-bust of a Greco-Roman lady, possibly modelled after the 2nd century AD copy of the bust of the Ludovisi Juno, amid an oval plaque ornamented by twisted wirework, surmounted by two mourning doves, and at the bottom the head of a sable antelope with large plain leaf-like ears and a finely coiled pair of unbranched horns, and suspending a small coral intaglio depicting a sheep with a six-pointed star and crescent in the sky, and four tassels composed of garnets, baroque pearls and corals, mounted in 22k gold, together with a fancy linking chain, length 23 inches, late 19th century

Dimensions: pendant height 100 mm, width 42 mm
Weight: 63.0 grams
Good overall condition, one tassel reattached with a small hole in the plaque, reverse with a dent on the edge